Meller Sapphire Windows feature Mohs 9 hardness (second only to diamond) to enable them to withstand fast moving dirt, sand, and saltwater, and can be custom fabricated to match precise design requirements. Ideal for providing front surface protection, they are available with multi-spectral antireflective coatings that can meet salt fog requirements.

Various Configurations can be custom fabricated and coated to customer requirements and specifications. 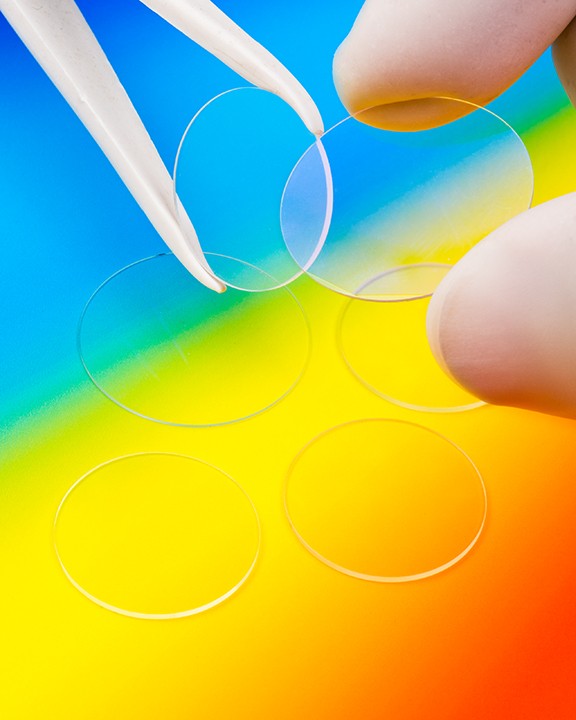 These windows offer an economical choice for a variety of optical, mechanical, and electronic applications. The strength, wear resistance, chemical inertness, beneficial thermal characteristics, and low cost makes them ideal for use in high volume production applications. 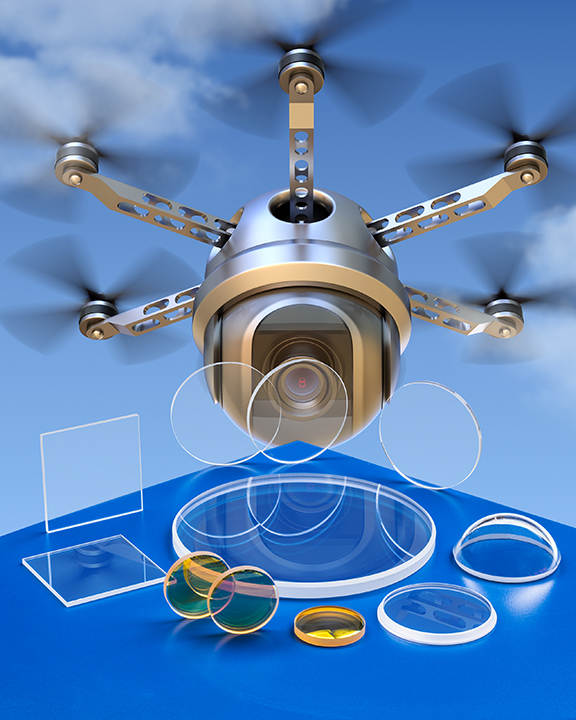 These windows are designed for more demanding optical applications where image quality and minimizing birefringence effects are important. The starting material selected has negligible lattice distortion, and high purity. 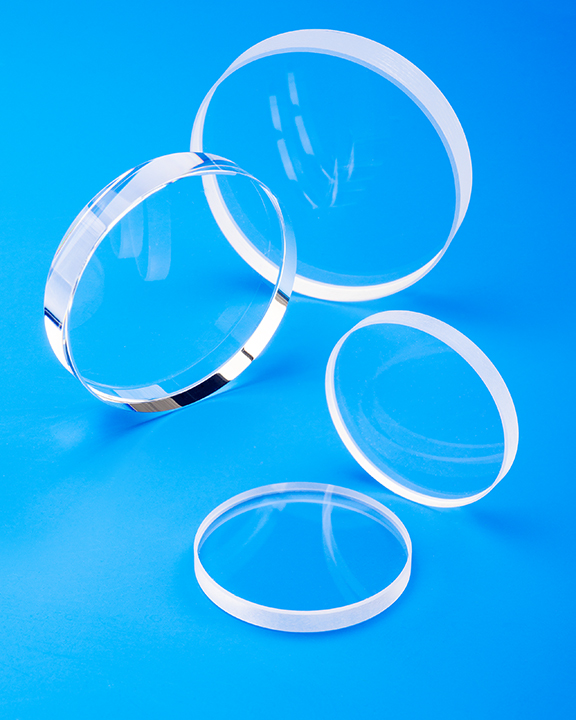 These sapphire windows are designed for use in critical optical and laser applications where image quality and minimizing birefringence effects are important. The starting material selected has negligible lattice distortion, and high purity.

Orders from stock typically ship in 3-5 days. Manufacturing lead time can be 2-3 weeks. Please call the factory for expedited delivery or quantity discounts. 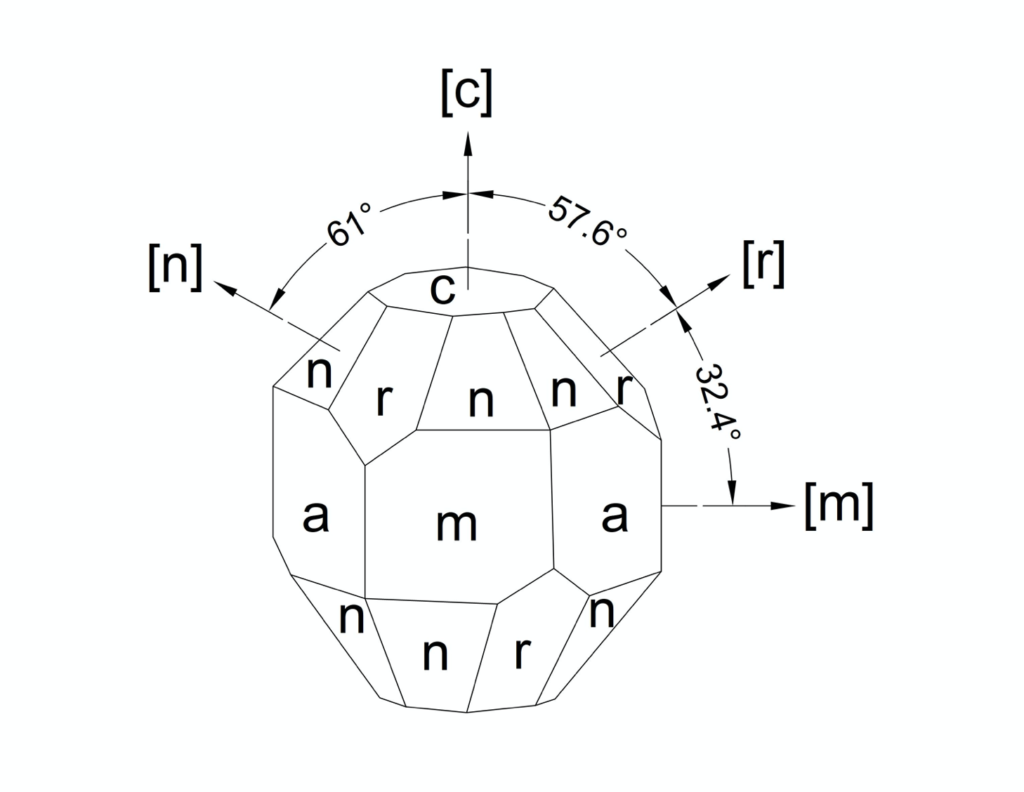 A representation of sapphire's crystal structures and important oriantation planes

This chart displays some of the properties influenced by sapphire's crystal symmetry. 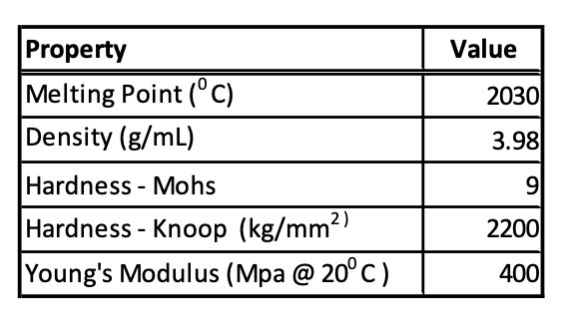 This chart shows some of the additional properties displayed by sapphire

Sapphire Transmittance vs other materials

Sapphire transmittance ranges from the near ultraviolet to the mid-wave infrared region. The ability to transmit out into the near infrared region makes it a good choice for use for mid-wavelength infrared camera systems. 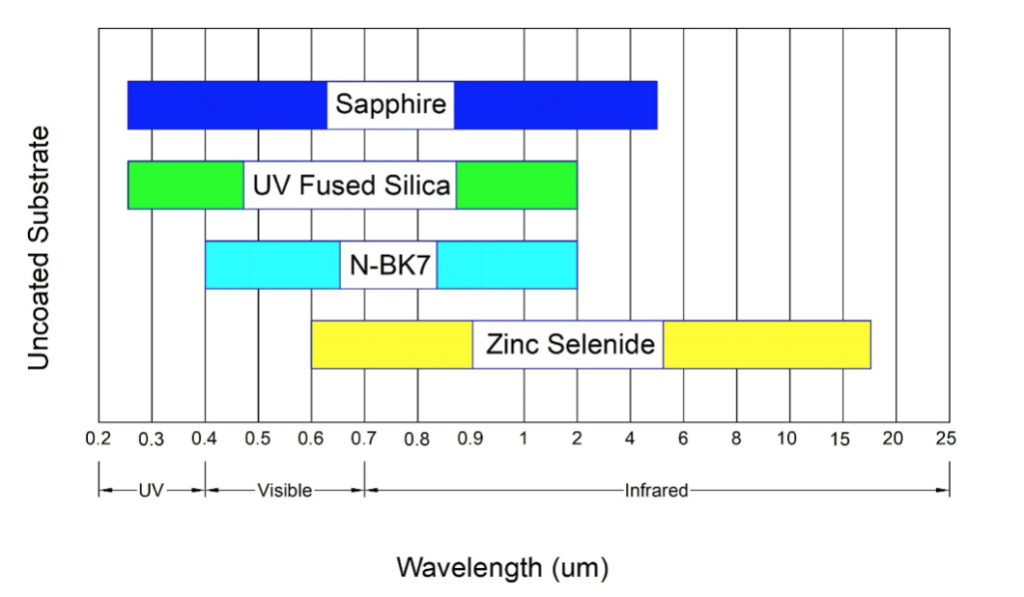 The sapphire crystals currently available in the marketplace today are produced (grown) by one of the following three methods.

This method is used when a near net shape product is required. The crystal is formed by dipping a “seed’ crystal into molten alumina oxide and then slowing pulling the re-crystallizing material through a shaped capillary. For window applications the resulting shape would be a flat ribbon or sheet. Although the crystal quality produced by this method is good, it is not as good as the following methods.

Like the growth method described above, the crystal is formed by dipping a “seed” crystal into molten alumina oxide. The seed crystal is slowly pulled upwards and may be rotated simultaneously. By precisely controlling the temperature gradients, rate of pulling and rate of temperature decrease, it is possible to produce a large, single-crystal, roughly cylindrical ingot from the melt. This technique crystallizes the entire feedstock volume into a boule. The size of the crucible holding the molten alumina oxide is close to that of the final crystal, and the crystal grows downward into the crucible, rather than being pulled up and out of the crucible. The upward pulling of the seed is at a much slower rate than the downward growth of the crystal.

Unlike the other two methods described above, the crystal is formed in-situ. The “seed” crystal is place at the bottom of the crucible covered with the starting “feed” stock. This is placed inside the vacuum furnace which has a cold finger cooled by helium in contact with the base of the crucible where the seed is located. The alumina oxide feed stock is then heated above its melting point, while the seed is maintained in a solid state. The crystallization takes place as the furnace temperature is slowly decreased, and the helium flow to the cold finger is increased. This process produces a large single crystal sapphire boule free of residual stress.

With superior hardness, strength, durability, and survivability compared to other optical materials. It is the material of choice for optical applications involving exposure to high stresses and harsh environments. Sapphire is one of the strongest and hardest optical materials available with excellent abrasion, chemical, and thermal shock resistance. The hardness of sapphire on the Mohs scale is 9, compared to a value of 10 for diamond.
Meller Optics fabricated sapphire windows achieves high strength compared to our competitor’s windows. This is due to our proprietary finishing processes. These processes produce extremely smooth, and flat surfaces with a damage free subsurface. These processing techniques significantly improves the strength of sapphire window. In addition to our standard stock windows, various configurations can be custom fabricated to customer requirements and specifications.
Custom antireflective coatings are available upon request. Depending on application we can provide a “V’ coat for a specific wavelength, a multi-band coating maximizing transmission at specified wavelengths, or a broad-band antireflective coating over a specified wavelength region.

Sapphire is pure Alumina Oxide (Al2O3) in a single crystal form. The anisotropic crystal structure is rhombohedral which produces different physical and optical properties dependent on the crystal orientation. Sapphire’s crystal planes are designated as c, a, m, r, and n. The c-plane’s axis usually called out as the “optical axis” or the “ordinary direction”. The a-plane’s axis and the m-plane’s axis are the “extraordinary direction”.

We maintain a substantial inventory of these sapphire windows and most are available for shipment from stock. If you have a specific need or question that isn't addressed here - please let us know!